To produce a CD of music of an essentially spiritual nature for the highly original form of the viola and organ duo, the eminent French organist Loïc Mallié and the excellent violist Karsten Dobers had been thinking about it for a long time.

It all goes back to their collaboration on the occasion of the recording of the album Altissimo! – their version for viola and organ of Harold in Italy by Berlioz (Hortus 141). Released in 2017, the record received a rating of 5 diapasons. The enthusiasm of listeners’ reactions spurred them to follow up on the experiment of this highly original form of the viola and organ duo.

It was through making a viola and organ reduction of the magnificent Trauermusik by Paul Hindemith, who in the last section quotes the chorale 'Vor deinen Thron tret’ ich hiermit' by J.S. Bach, that the idea occurred to them to take this work as a model, so to speak, in order to bring face to face early chorales elaborated upon by J.S. Bach and original works composed on the basis of those chorales (music, literary text or both at once). Two such works already existed, one of them – by Hindemith – just mentioned, and the other for solo viola by Bernd Alois Zimmermann, 'Sonata for Viola Solo'. Zimmermann (1918-1970) composed this piece in 1955 incorporating the theme of the chorale  'Gelobet seist du, Jesu Christ'. ('Praised be thou, Jesus Christ'). Then, three further works were commissioned from living composers (Edith Canat de Chizy, Gorka Cuesta, Loïc Mallié).

The CD will be released on the Hortus Label and is now in its final production stages, financed by a  crowdfundig campaign that is still underway.

The choice of carrying out this recording at Orgelpark in Amsterdam is largely due to the exceptional confluence of the quality and diversity of the instruments at hand in this uniquevenue  and the commission by Johan Luijmes, Artistic Director of Orgelpark, for three viola and organ works. 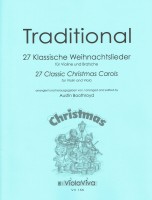