Those interested in viola music in Switzerland – and beyond – do not come around a name: Konrad Ewald from Liestal, Baselland. The retired teacher of German, French and Latin is an expert in viola literature.

Niklaus Rüegg - The music described in his epochal guide «Music for Viola • The rich viola repertoire from Aaltonen to Zytowitsch» has all been played, described and archived by Konrad Ewald himself. Most of it is, or used to be, part of his collection, and is well archived in his big house in Liestal. There's a lot of sheet music - not just for viola. Just as with the pre-digital «ancient» filing cabinets of public libraries - the format has ceased to exist - all scores are sorted by author, title and line-up. Ewald started his collection in the 60s. Marked in red are works which he gave away.

Next to sheet music and reference books, we find plenty of CDs and LPs, as well as German, French, Greek and Latin literature, as well as countless illustrated books about distant countries. Many of the CDs are filed on a shelf, which he had just received late April, from Erich Wyss at Musica Classica, who had given up his business in Spalenberg. The top shelf houses «Romantic Piano Concertos» by Hyperion, a series started in 1990. We find only unknown composers, no Brahms, Schumann, Grieg or Chopin, however we find Litolff, Ries, Scharwenka and others. How else could it be: His recording collection is listed on a card index too.
In the evenings, Ewald likes to listen to music, sitting in his armchair.

Experienced Violist
Ewald has been playing the viola for all his life, and is still active as part of a few chamber music ensembles. For decades, the 82-years-old had played in the orchestra of Liestal. For the last 20 years, he has been playing with the same quartet - all professionals, except for him. There are occasional concert performances in a private setting. He also played as a guest performer with other ensembles. This summer 2018, he is following an invitation to a chamber music week in France, learning string quartets by Glinka, George Onslow, José Bragato, Joaquín Turina, and the piano quintet by Max Bruch. Ewald appreciates finding unknown, yet excellent works, then performing them. All too often he came across people, particularly professionals, who were only interested in the known literature.

A few years ago, the leader and founder of www.music4viola.info approached him with a project, looking to create a digital platform for the viola. He wanted to use Ewald's book «Music for Viola» as a data basis. Ewald agreed, even though he doesn't use computers or the internet, out of conviction. He shared sheet music from his collection, preparing them for the website, one at a time. Cover and first pages are being scanned and then presented on Music4Viola also through the flipbook function. The still available sheet music of various publishers is also being offered by the online shop. Part of Ewald's sheet music will find a new home at the Vera-Oeri-Library, University of Basel, Switzerland. He leaves the library all of the already digitally registered pieces for and with viola.

We are seated at the table of Ewald's living room, with a beautiful view on Lausen and Sissach.

Mr. Ewald, you have spent a life discovering the world's viola repertoire...
If you're thinking that I've spent all my life on viola music, you're mislead. I simply played, and bought and archived scores out of curiosity. My violin teacher Dora Jenny had urged me to change to the viola, back in time. Her brother was a choir director and looking for violists to play in his orchestra. At that time I was already 18. The instrument captured me, and I stayed with it. Among the first viola compositions I found were the «Märchenbilder» by Schumann, and the «Arpeggione-Sonata» by Schubert. The start of a journey..

Why did you write your own viola guide, «Music for Viola • The comprehensive viola repertoire from Aaltonen to Zytowitsch»? There's already Franz Zeyringer's guide.
Zeyringer is a reference work with a comprehensive work list. In my book, I added descriptions about character and difficulty of the works. By the way, Zeyringer is full of mistakes. I used to send him error lists during his lifetime. He was always very grateful for my remarks.

Your book can be purchased on Music4Viola. Is it still popular?
Not as much as it used to be, but I am not a professional either. Important works are the «Viola Bibliography» and the «Viola d'amore-Bibliography • The Repertoire for the historic Viola d'amore from around 1680 past 1800», by Michael Jappe, and also «Literature for Viola» by Franz Zeyringer.

Did you grow up in a musical fymily?
Yes, my father was a primary school teacher, but active in many ways. He was an enthusiastic theatre person and author of poems. Around the age of 10 I picked up the violin. All of my seven siblings learnt a musical instrument. My parents were convinced that every child should be doing so. Four out of eight siblings still play to date, and two sons of my younger brother became musicians.

What music do you like most?
I prefer the 19th century, Bruckner, Brahms, Mahler - also symphonies, not just viola works.

Do you prefer CDs or LPs?
Both are fine. One has to get over the occasional scratches with LPs. I own an LP with quartets by Schumann and Brahms. Somewhere on the disk, you can hear a blackbird singing. This kind of relic can not be found on CDs.

You are Dr. phil. for German, French and Latin. Did you intend to become a music professional?
(Hesitates) No. I started out too late. At first, I wanted to study medicine, then I started with Phil I, however I wasn't that goal oriented in the beginning. I had started a dissertation in French, but my thesis supervisor passed away. One I started earning money, I had already been 30 years of age.

Where did you teach?
At a secondary school with a high school preparatory department in Liestal. I retired in 1996 at the age of 60.

You wrote a few books with cultural and social critic content. Do you have a message for the world, or did you just feel the need to write it down?
(Laughs) Yes, that needed to be written down. I picked up plenty of taboo topics, such as religion and sex. During my days as a teacher, I wrote "Repressed Knowledge - a Reading Book for Liberal and Open Humans, and Humans on that Journey". Just as with music, I commented on topics that humans are badly informed about. One could see me as a missionary too.

Have you traveled a lot?
Yes, although not because of music... I made multiple trips to India, Africa, Togo and Senegal for example, which are not accessible nowadays, as well as Tunisia and Cape Verde, and Sri Lanka on a couple occasions.

What experiences did you make in these countries?
I loved the island experience, for example Djerba and Cape Verde, but also the Seychelles, Mauritius and even Sansibar. Over the past years, I only visited Greek Islands.
In India I was shocked to find the poverty in the streets, and the distance between poor and wealthy. Sri Lanka is a natural paradise, however politically troubled. I met a few friends there, with whom I have stayed in contact. Today I don't like to travel far distances anymore. I'd like to see Greece a couple more times.

What are your next projects?
I don't have any projects (laughs). I am looking after my library, and I play chamber music. If somebody invites me to get involved, I say yes or no.

This blog article is written by Niklaus Rüegg, graduate of the Zurich International Opera Studio, graduate of the Basel Opera Academy, twice winner of the Migros Gifted Scholarship, numerous engagements in opera, operetta, musicals and concerts in Switzerland and abroad.
Rüegg has also been working as a music journalist for ten years and is responsible for the association pages of the VMS (Verband Musikschulen Schweiz) in the Schweizer Musikzeitung.
As a young man, Niklaus Rüegg had played the violin and viola.
Photos: Niklaus Rüegg, 2018
1. Login ot register here...

2. Find the composer or work for which you want to write an input. 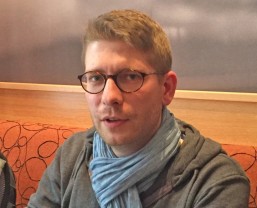 The musicologist Phillip Schmidt has dedicated himself to 18th century viola music. Schmidt originally wanted to become a singer or chemist, but then decided to pursue a career in musicology. He pays special attention to the viola, his favourite instrument, which he also plays himself.
» To the blog