There have been many well-known and virtuoso Viola players in the past. Today we will concentrate on an active musician who, in his younger years, became one of the greatest Viola players of his time. Let yourself be inspired by this wonderful young master... 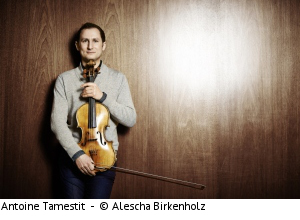 Antoine Tamestit was born in Paris in 1979 and received his first Violin lessons when he was 5 years old. When asked why he decided, at the age of 9 years, to change to the Viola he replied: «I started with the violin and very quickly I felt, the violin is not my cup of tea anymore and it’s somehow too high and to brilliant. » His second choice was the Cello but because it was technically unattractive, his teacher at that time advised him to take up the viola. He said about his new instrument: «...and this is what I fell in love with! ... I want to play this instrument, which you can hold here, but it still sounds deeper. I was a convinced viola-player from the very first second and I don’t regret my choice! »

At the beginning he studied under Jean Sulem at the Paris conservatory, later on the Yale University under Jesse Levine and then in Germany under Tabea Zimmermann. In the meantime he teaches at the conservatoire Supérieur de Paris. Tamistit is married to a singer and lived for some time in Brussels. 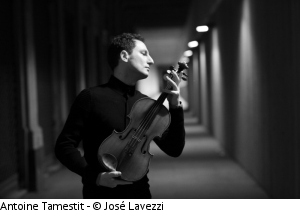 Tamestit won numerous first prizes in ambitious competitions. In 2000 he won the Concours International d'alto Maurice Vieux, and a year later the Concours International William Primrose, 2003 the Young Concert Artists Auditions in New York, 2004 the International Music competition run by ARD and 2008 the sponsorship to the Bremer music festival awards. He earned the title: 'Best young solo instrumentalist’ of the year at the 'Victoires de la musique classique' and from the BBC he received 'New Generation Artist' twice in a row.

Antoine Tamestit has a unique love for chamber music and in 2007 he, Frank Peter Zimmermann and Christian Poltera, founded the 'Trio Zimmermann'. The trio travels to all the major cities in Europe and publishes recordings from the works of Beethoven, Mozart and Schubert.

Tamestits musical versatility stands out as he is just as much at home in the classical and in the modern music. He dedicated himself to record a CD with solo pieces for Viola from Hindemith. At these recordings even the world famous conductor, Paavo Järvi had his baton at work. Tamestit says, about modern music: «During the 20. Century, composers have taken more interest in the viola and have composed more. This has given the Viola a stronger position and has opened up more possibilities.»

A big highlight for the Artist must have been the wrold premiere of the Viola Concerto by Jörg Widmann which was written especially for Antoine Tamestit. This performance took place, in Paris on the 28 October, 2015 with the Orchestre de Paris under Paarvo Järvi in the Philharmonie de Paris. 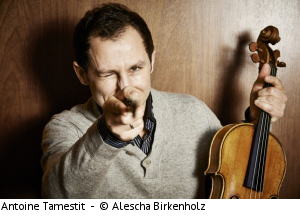 Since 2013 Tamestit works together with Nobuko Imai, the artist director of the Viola Space Festivals in Tokyo. The festival dedicates itself to the Viola repertoire throughout the centuries, encouraging up and coming young musicians, with extreme emphasis on the artistic support of the young Viola players of the future.

The Viola that Tamestit charms his listeners with was built in 1672 as the first from Antonio Stradivari. She holds the name, ‘Mahler’ because she once belonged to him. The instrument is loaned to Tamestit by the Stradivari-Stiftung-Habisreutinger.

For Antoine Tamestit it is an important concern, to pass his passion for the viola and the music trough master classes worldwide. From 2007 to 2016 he taught as a professor at the Kölner Musikhochschule and at the Paris Concervatoire.

Here are a view Inspirations to reenact, payed by Tamestit:

Hindemith – Der Schwanendreher (https://www.youtube.com/watch?v=NkFbrUEhSCc)
A recording with the hr-Sinfonieorchester (Frankfurt Radio Symphony Orchestra) under the guidance of Paavo Järvi, with Antoine Tamestit, from 2012

Berlioz – Harold in Italien (https://www.youtube.com/watch?v=LpPdLjsBxHA)
A recording with the Orchestre national du Capitole de Toulouse under the guidance of Tugan Sokhiev with Antoine Tamestit from 2012


This Blog article was written by Mascha Seitz for Music4Viola.
‍ Add comment
The blogs in a short overview.
» To the blog list

Do you don't want to miss any news regarding viola anymore? Our newsletter will keep you informed.
» Subscribe to our Newsletter for free