One day of an almost ordinary life of

Airat Rafailovich Ichmouratov, born June 28, 1973, is a Volga Tatar born Russian / Canadian composer, conductor and clarinetist. He is also an invited professor at Laval University in Quebec, Canada. Ichmouratov is maried to the violist Elvira Misbakhova and has two daughters Alina and Louisa. 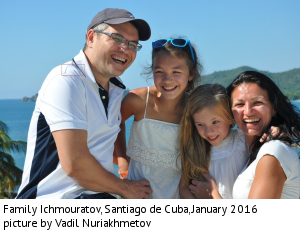 I opened my eyes...it’s still dark, probably around 4:30 in the morning. I’ve noticed that since I turned 40, I developed a strange habit of waking up very early, literally with first sunlight. My dad, as far back as I remember, was always up very early. When I was a kid, I loved to sleep and never understood how he was able to do that. What force was pushing him out of the bed while it was still dark? Well, today I am lying in my bed and I know there isn’t any force. You just open your eyes and your day has started.

I love early mornings. I don’t know exactly why. Maybe because it’s the most inspiring moment of the day, when I most likely will hear music in my head. Or maybe it’s because it’s a part of the day like no other, a moment of solitude when I completely belong to myself while my family is still sleeping. My daughters Alina and Louisa will wake up soon and I will have to start thinking about what to put in their lunchboxes to surprise them at school. And then I have to worry that the young one doesn’t miss her school bus. No matt 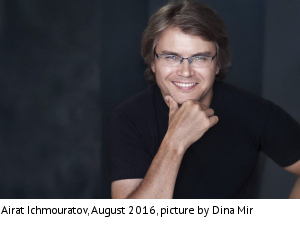 er how early she wakes up, we’re always getting out of the house literally one minute before the bus comes. And just like that, another busy day has started. I need to do this and that, make phone calls, answer emails, go to work, get the kids from school, cook dinner. My wife, Elvira, is a violist, a very good one at that. With being so good, comes being very, very busy. That’s the life of a good musician, most of your evenings belong to the public.

Back to my early morning…I open my eyes. It’s still dark...I am listening. Here it comes, some melody appears in my head. I am listening... Sometimes it appears and disappears. Sometimes it comes and then it starts to develop. Most of the time it sounds like an orchestra. I hear all the instruments and counterpoints, but this is so fragile. If I don’t write it down instantly, it could disappear and never come back. It happens all the time. However, I have a very handy tool, thanks to Steve Jobs. Modern composers have smart-phones for such occasions! 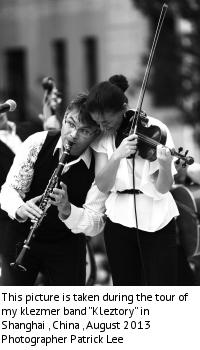 Usually when I hear something during the day and I don’t have time to write it down, I simply whistle it and record it on my iPhone. Yeah, imagine if Beethoven could have done that! Though, I think, he wasn’t in need of one. His talent was way beyond that of normal people. Sometimes, when I listen to the music of the great composers of the past, I feel it’s not really done by a human. Some music is so perfect and beautiful, it almost feels like it’s the touch of something from above. I don’t know if it’s god or extraterrestrial, or whatever you want to call it. But being a human myself (I think I am :) and listening the 6th movement of Mahler's 3rd Symphony, I swear, it’s not written by a human. Well, I know no matter how much I try, no matter how much I study and practice, I will never ever be able to compose music like that. It’s simply beyond my capabilities. In fact, I don’t know any other live human being who can compose music like that. Actually, interesting fact, the 20th century produced a large amount of great musicians. There were lots of stunning conductors and soloists and there were quite a lot of absolutely incredible composers, such a Mahler, Strauss, Ravel, Shostakovich, Prokofiev, Gershwin, Stravinsky, and Schoenberg, just to name a few.

Today, we have a huge amount of great soloists. Every year we have new discoveries of phenomenal performers on big international competitions. Yes, we have lots of stunning conductors. Composers? Well...we definitely have a very large amount of composers, with some of their personal websites claiming that they are very best of the best. Perhaps some are, but I was wondering if there is at least one live composer that we can put in the same category as Stravinsky, Ravel, and Mahler? 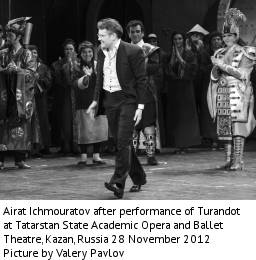 le opinion, I don’t know anyone who could compose at the same level as Rachmaninov, Debussy, or Puccini. I find it very strange. About hundred years ago, the music world was shaken by Stravinsky's Rite of Spring and amazed by Strauss's Der Rosenkavalier. Today, lots of new music is being released, but I am not sure that it has the same level of talent. And I am not even talking about contemporary atonal language. I absolutely don’t want to open this «Pandora’s Box» :) We could talk about it forever and there is no right or wrong answer. It’s just my humble opinion. I love early mornings...funny, sometimes I could hear a melody, beautiful and exciting. I feel I am totally in love with it. So I try to keep repeating it in my head, because I am afraid to lose it. I really enjoy it when the melody is still in my head while I have a hot shower. Usually, hot water provokes my imagination. I start to hear big, noisy culmination points, with lots of percussion and brass. I also hear great harmony progressions and modulations. I get very excited about this mental music. It sounds like a masterpiece! But then suddenly I ask myself... is this even my music?! Then I realize I have heard this before. It was the theme from Prokofiev’s 3rd piano concerto. It happens to me all the time :)

Each morning, I am happy to wake up in a comfortable bed in my own house. Afterwards, I go for a walk with Maya, my three month old Golden Retriever puppy. I was born and grew up in Soviet Russia. In 1998, for several reasons, I had to leave my country and look for a new home. I was fortunate to have found it in Montreal. But as every immigrant does, I had to face the shocking initial years of adaptation to a new country 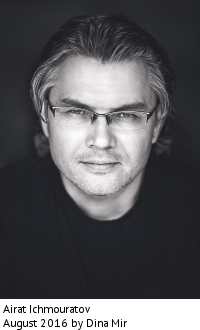 , new culture, new languages. Upon arriving in Canada, my wife and I survived the first several years by playing for spare change in the subway stations of Montreal and on the streets of the market in Ottawa. We existed almost entirely on the hope that one day we would again be recognized and respected musicians performing on big stages. We persevered. This was a rough schooling, but it probably made me stronger and I had a chance to learn how to improvise and play Klezmer as well as many other styles of music. Equally as important were all the amazing people I encountered, many of whom are still in my life as they became great friends and mentors. I will always thank them in my heart for being there for me and my family. Their support, kindness, and optimism have had an enormous impact on my life and have heavily influenced the way I am now…

I believe that music is a universal language which could be understood by every person on the planet. It's an influential and emotional tool that can create awareness about what is happening in the world. Throughout my compositions, I aspire to touch the everyday feelings of each person on the planet. Every nation has its own beauty, its exciting and rich cultural traditions. Music is the language of emotion and with its aid, I would like to enlighten others, allow them to see this beauty and respectfully embrace traditions. We are all equal in this world. We only need to learn how to embrace and respect our differences. I believe music is a great way to start.